BMDs Are (Finally) in the City 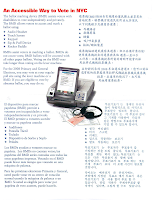 A mailing (to the left) from the New York City Board of Elections earlier this week notified voters that ballot marking devices (BMDs) will be available to voters who need assistance in every precinct. This long overdue development was mandated by the Help America Vote Act (HAVA) of 2002.

Six years and one lawsuit by the U.S. Department of Justice later, New York remains the least complaint in the nation with HAVA. Just when will the mechanical lever machines be replaced? According to Bo Lipari, the 2009 deadline is now slipping. New voting machines apparently are failing rigorous testing, which our colleague Larry Norden agrees with Bo is a good thing. Still, the state is required (once again) by law to install new machines in 2009.
Posted by anonymous at 2:18 PM No comments:

Court to Board of Elections: "Weak."

Last week the Second Circuit Court of Appeals overturned the New York State Board of Elections' rule barring the use of absentee ballots in party county committee races. Under the law, absentee ballots were permissible in all other races, and were not allowed in party county committee races because they allegedly take too long to count. The decision calls the Board's rationale "flimsy," especially in light of the fact that local boards of election have up to nine days to complete their canvass and certify results. The court deemed the Board's argument so "exceptionally and extraordinarily weak" that it could not justify even an admittedly minor burden on First Amendment rights.

A small victory, perhaps, but it's nice to see folks take notice of the Board of Elections' often baffling logic.

Posted by Laura Seago at 2:14 PM No comments:

By now we've all heard about the $427 million in budget cuts the legislature passed last week, but you may have missed this article in the New York Daily News about the word on the street that member items won't take much of a hit.

While the approved cuts include a $50 million reduction in member items, Assembly Speaker Sheldon Silver was quoted as telling his members that they wouldn't have to break any promises of cash for their constituents. We thought it might be an appropriate moment, then, to review a few highlights from the 2008-09 member items, culled from NY PIRG's member item database:

The list goes on (and on; there are about 5000 member items in each house for the 2008-09 fiscal year). And as we've blogged before, member items are wildly skewed toward the majority in both houses. If member items do take a cut under the new budget plan, we'll be anxious to see who wins out in the budgetary battle between the contractors and the little league.

Posted by Laura Seago at 9:44 AM No comments:

The Writing on the Revolving Door

Our colleague Andrew Stengel has an op-ed in the Albany Times Union this morning decrying the ethics crisis in the legislature exemplified by Bruno's quick transition from Senate majority leader to lobbyist this summer. Andrew and Susan Lerner of Common Cause argue that the state's Legislative Ethics Commission has neither the will nor the muscle to bring real reform to Albany.

Our Interest in A Recent Paterson Veto, and New York's Really Bad Laws on Ballot Design

I've been meaning to write about this for some time, but got a little side tracked in our national election-related work. A few weeks ago, a lot of ink was devoted to Governor Paterson's 34 vetoes. Not surprisingly (and quite properly) most of that attention was focused on the price tag of the various bills he vetoed.

I had a particular interest in one of those 34 bills that didn't have much of a price tag -- Senate Bill 5162. That bill would have required that county boards of election submit ballots to the State Board of Elections for review and approval whenever any state-wide candidate, proposed amendment to the constitution or other question provided by law to be submitted to a statewide vote is printed on a ballot.

Why was I interested in this bill? Because I recently co-authored a ballot design report that found New York has among the worst ballot design laws in the country -- in particular, the requirements for a full-face paper ballot, the requirement to include a party name and emblem next to every candidate name, requirements to use all capital letters instead of more readable mixed-case letters, and the unusually complicated, jargon-filled instructions provide a text-book example of a state election code that makes designing usable ballots particularly difficult.

New York hasn't had the high-profile ballot design debacles that other states, like California, Florida, Wisconsin and Ohio, have recently had (see the report if you want to look at how dramatically these debacles have affected high profile elections -- there are an astounding number of examples from just the past decade). But if things don't change, New York will eventually have the bad luck of so many other states. All it takes is a close race. And, as we noted in the report, "as New York makes its transition from lever machines to optical scan systems [next year], the problems caused by [these bad laws] are likely to become more apparent."

The reason I was so interested in Senate Bill 5162 was that it seemed to institute one of our recommendations: namely that State Boards review county-designed ballots (imagine how different history might have been if someone in the Florida Secretary of State's office had reviewed the Palm Beach butterfly ballot and told them that confusing design was unacceptable). Unfortunately, the bill seemed to have some major flaws: it didn't impose a deadline on the State Board for approving or rejecting ballots, and it didn't say what would happen if the bipartisan board became deadlocked and failed to act on a particular ballot.

We were encouraged by the Governor's veto message. He recognized the problems with the bill and made this point:

Poor ballot design remains an issue that often leads to disenfranchisement of voters. The inconsistent placement of candidate names on the ballot face may cause voter confusion and increased error rates. According to a July 2008 report entitled "Better Ballots," by the Brennan Center for Justice, poor ballot design frustrates voters, undermines confidence in the electoral process, and contributes to related Election Day problems. In fact, one state-level recommendation in the report is to have a state election official review local county ballot designs... I encourage the sponsors to work with my office to craft legislation that will help prevent voter confusion in a manner that considers the practical effects on election administration.

We hope the legislature will take him up on this offer. New York's election code makes designing a usable ballot far too difficult. That will have major consequences on our elections as we move from lever machines to paper ballots.
Posted by Larry Norden at 3:57 PM No comments:

Email ThisBlogThis!Share to TwitterShare to FacebookShare to Pinterest
Labels: elections

Say It Ain't So, Joe

Joe Bruno has registered as a lobbyist, Capitol Confidential reports.

Posted by anonymous at 2:41 PM No comments:

Is There A Majority Party in the Senate?

Joseph Bruno’s resignation continues to have an impact on the New York Senate -- Senate Republicans now have only 31 votes, putting the majority caucus below the 32 votes previously required to pass legislation. In Bruno’s absence, are fewer votes needed to pass a bill by majority vote?

The New York State Constitution implies that the passage of a bill requires a majority of the number of members elected to each chamber:

…nor shall any bill be passed or become a law, except by the assent of a majority of the members elected to each branch of the legislature.

The National Council of State Legislatures recently took note of this potential problem. Few states are much clearer on the matter, but the Louisiana Supreme Court addressed the issue in 2005 when two state senators filed a petition against the President and Parliamentarian of the Louisiana Senate who had asserted that fewer votes were required for passage in light of two vacancies in the state senate. The court’s decision may not bode well for New York Republicans:

“Members elected” and “elected members” in constitutional provisions requiring majority or super-majority of members of senate to pass bills or constitute quorum mean the entire membership authorized to be elected to each house, i.e., 39, not the elected, seated, and sworn members on the legislative day on which a vote is taken; thus, senate vacancies have no effect on counting of votes.

If votes are counted the same way in , things could really get interesting. We’ve blogged before about the impact of a more narrowly divided Senate under Skelos’ leadership – turns out that Republican fears about losing the majority may come to fruition well before Election Day.

Posted by Laura Seago at 9:53 AM No comments:

Bo Lipari notes that New York's new voting machines keep failing during certification testing, and that this is a good thing. Here's why he thinks so. We agree that rigorous testing is a good thing -- and that it's better to find out about problems now then on Election Day.

Let's just hope the vendors get their acts together in time for New York to use its new voting machines by 2009, as it is required to do by law.
Posted by Larry Norden at 2:24 PM No comments: 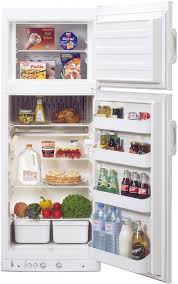 Generally speaking I'm a fan of increased oversight, especially in the case of member items.

This spring Attorney General Cuomo proclaimed that he would question the nearly $170 million of grants that come from state funds, in part to ensure that are no conflicts of interests between the recipient groups and the legislators.

As reported by Newsday's Michael Gormley, the first batch of rejected grants are posted to the attorney general's Project Sunlight. The nixed member items include $5,000 for a walk-in fridge for an Elks Lodge in Massapequa submitted by Long Island state Senator Charles Fuschillo due to "insufficient information." Other items were rejected due to constitutional or statuary concerns, or for lack of explanation of conflict of interest.
Posted by anonymous at 10:57 AM 1 comment:

We don't often find ourselves on the same side of the aisle as the folks over at the Manhattan Institute, but the institute's new transparency website, SeeThroughNY, is illuminating to say the least. The site allows users to look through information on state government spending -- and it isn't pretty. A quick comparison of two rank-and-file members of the Senate who were elected in the same year shows that the majority member spent more than double the amount spent by the minority member on operations, personnel, mail, and travel.

The site has been so busy in its first 24 hours that it's still moving a little slowly - a story on WNYC this morning suggests that the bulk of the traffic is from state employees checking out their peers' salaries. Bad news, perhaps, for morale amongst minority staffers.