Photos from the October 27 Panel at NYU 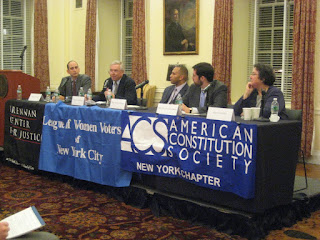 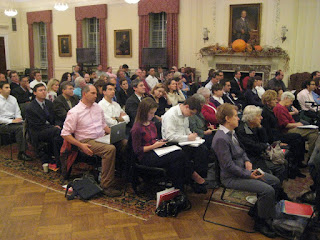 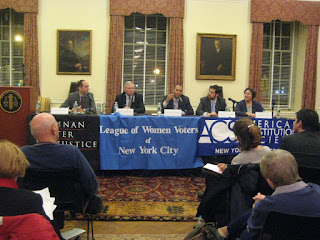 Posted by BrennanCenter at 1:13 PM No comments:

We had a great panel on how to reform the State Legislature at NYU Law School last night. With approximately 150 people in attendance, E.J. McMahon (Empire Center), Susan Lerner (Common Cause NY), Senator Squadron and Assemblyman Jeffries each identified the one reform they would most like to see enacted to make significant change in the legislature (there was no dispute that significant change was needed).

E.J. McMahon had what was perhaps the most provocative suggestion: turning the legislature into a "Citizen's Legislature," where the number of legislators was increased, the legislative calendar shortened to 30 days, and the position of Senator and Assemblyman turned into a part-time job. The three other panelists objected to this idea, citing the complexity of issues facing the legislature and arguing it would make the legislature even less effective than it is now.

Susan Lerner argued for reform to the committee process: less committees, more hearings, mark-ups and debate on bills. These are things we see in every other state legislature, and all four panelists agreed this reform was needed in New York.

Assemblyman Hakeem Jeffries argued for an end to the current process for Special Elections, whereby party bosses essentially choose the replacement for legislators who must leave office in the middle of their terms for reasons like criminal indictment. He noted that approximately 1/3 of the legislature has been chosen through this special election process. He and Senator Squadron have introduced a bill to tackle this issue.

We had an extremely engaged audience, with questions about redistricting reform, constitutional convention, elimination of member items and whether it made sense to turn the legislature into a unicameral body.

While there was general agreement that things were pretty bad in Albany right now, the panelists also seemed to agree that the public disgust with Albany presented an opportunity for some significant changes.
Posted by BrennanCenter at 11:13 AM No comments:

TUESDAY: Reforming Albany: What Is Wrong with the State Legislature and How to Fix It

On Tuesday, October 27, the Brennan Center will join the New York Lawyer Chapter of the American Constitution Society in hosting a panel discussion entitled Reforming Albany: What Is Wrong with the State Legislature and How to Fix It.

What: Reforming Albany: What Is Wrong with the State Legislature and How to Fix It
When: Tuesday, October 27, 2009, 6:30 PM
Where: New York University School of Law
Vanderbilt Hall, Greenberg Lounge
40 Washington Square South
New York, NY

We hope to see you there!

Posted by Laura Seago at 2:25 PM No comments:

A Blueprint for Fixing Albany

Today, the New York Times ran an editorial assessing the problems in and what needs to be done to fix them. Calling the state a “national embarrassment” and “a $131 billion monster controlled by a crowd of smug officials whose main concern is keeping their soft jobs,” the Times outlines a must-do list for state lawmakers. The editorial says what recent polls have already suggested – with the 2010 election a little over a year away, lawmakers fail to reform state government at their peril.

The editorial lays out a laundry list of areas for improvement that it will profile in detail in the coming weeks:

Some members of the state legislature are probably beyond redemption, but for those who still wish to accomplish something for , the blueprint outlined by the Times is a great place to start.

Posted by Laura Seago at 5:28 PM No comments:

What to Do About Monserrate?

As most of our readers now know, Hiram Monserrate, the Senate coup instigator accused of slashing his girlfriend in the face with a broken glass last December, was charged yesterday with a misdemeanor – not for the slashing itself, but for Monserrate’s rough treatment of his girlfriend caught on security video as the couple left for the hospital later that evening.

Had Monserrate been convicted of a felony, he would be forced to surrender his seat in the Senate. But because his crime is a misdemeanor, there is no requirement that he step down, even if he is sentenced to jail as his conviction allows.

Yesterday, Democratic Conference Leader John Sampson issued a statement saying that the “leaders of our conference are discussing the potential for further action in the Senate” and that they will “follow the letter of the law” should they choose to take action. Three Democratic senators issued even stronger statements today calling on Monserrate to resign and saying that they will work to remove him from the Senate if he does not step down voluntarily. Two more of their colleagues joined their call this afternoon.

It turns out that the letter of the law to which Sampson refers is quite clear. Section 3 of the New York State Legislative Law states in full: “[e]ach house has the power to expel any of its members, after the report of a committee to inquire into the charges against him shall have been made.” The law does not specify the structure of the committee or what the report must find.

Malcolm Smith, still the nominal Temporary President of the Senate, has the authority to convene a temporary committee to investigate the claims against Monserrate or to delegate the inquiry to a standing committee – say, the Ethics committee, chaired by Sampson himself. The evidence against Monserrate has already been aired in court and is publicly available. Once this committee submits a report on their findings, the question of Monserrate’s expulsion can be put to the chamber for a vote. If the sentiments of the growing number of Senators who have already spoken our against Monserrate are reflective of the rest of the chamber, it should be a pretty easy one.

Posted by Laura Seago at 5:08 PM No comments: